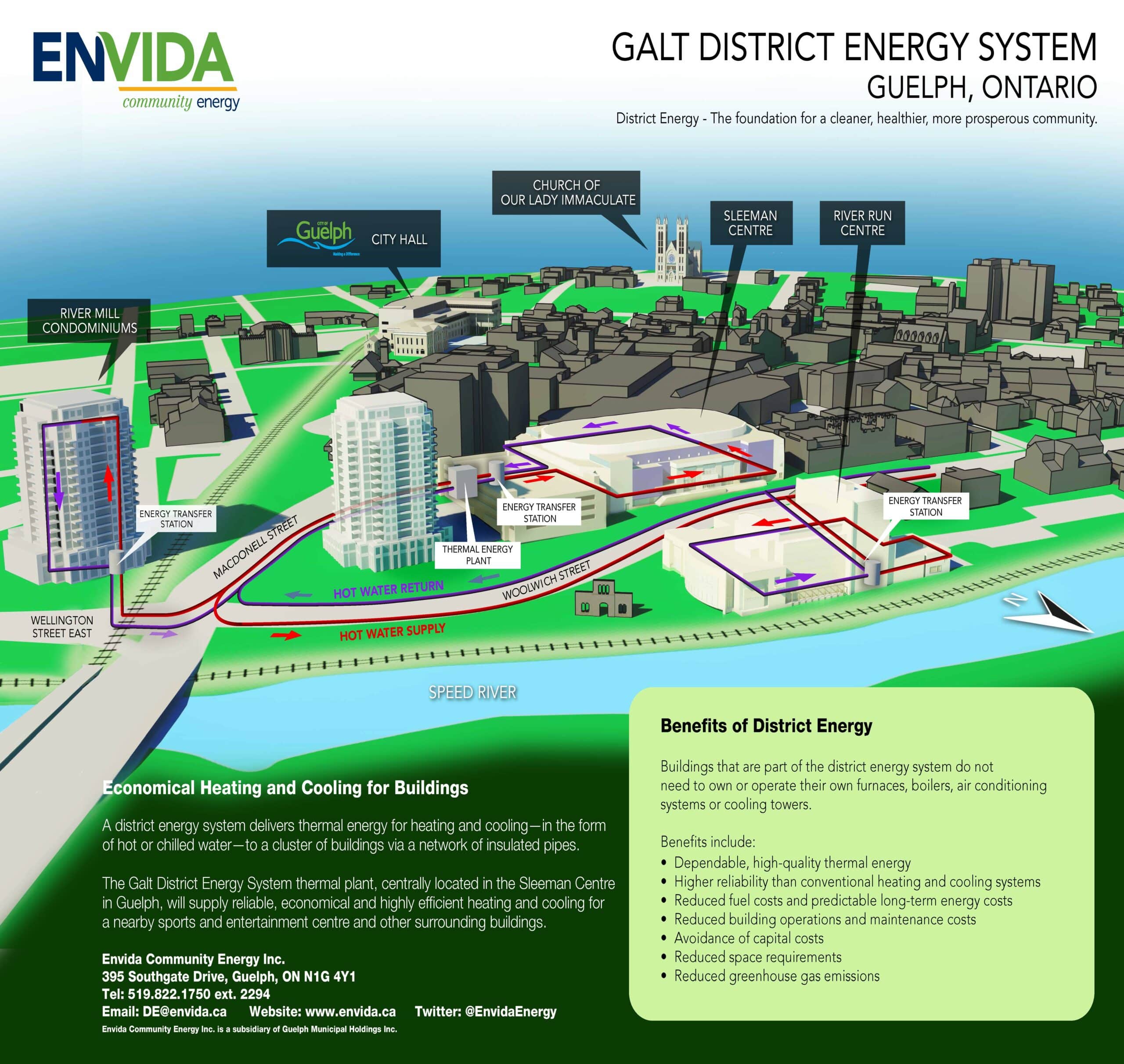 Planet Realty is proud of our relationship with a forward-thinking builder in The Tricar Group. Yesterday proved, once again, to be an example of their vision of progress and sustainability; as they officially announced their partnership with Envida and the City of Guelph, to join the Galt District Energy System with their new offering, River Mill Condominiums.

Below is the article from the Guelph Mercury detailing Tricar’s initiative to make River Mill Condos the first of its kind.

GUELPH — When Tricar Group builds its 18-storey River Mill Condominiums along Wellington Street it won’t have to worry about installing its own furnace, boiler, chiller and cooling tower. The building will be hooked up to the Galt District Energy System.

Guelph Mayor Karen Farbridge said Tuesday during a press conference that Tricar’s decision to plug into the new central heating and cooling system – the mechanical heart of which is located in the Sleeman Centre – is a “huge” step in the development of a shared energy network that will one day supply much of the city’s heating and cooling needs.

Tricar, she said, is playing a major role in downtown renewal, and will have the first residential building in Guelph heated and cooled by district energy. It is crucial to have “early adopters” for such innovative initiatives, those willing to take a leap of faith to join in, she said.

“District energy will play an important role in Guelph’s future – not only our energy future, but our economic future,” she said, adding that Tricar’s commitment is proof that district energy “makes good business sense.”

In an era of global energy volatility, and in a part of the world that has been slow to embrace the district energy alternative, Guelph is ahead of the pack in strengthening its long-term energy security, and giving itself a competitive advantage in the process.

“The 18-storey River Mill Condominium is going to be supplied with heating, hot water, and air-conditioning by the Galt District Energy System,” said the mayor.

River Mill is the third building to connect to the system along with Sleeman Centre and River Run Centre. The buildings will share energy through an underground network of pipes.

The city has a long-term strategy to build North America’s first city-wide district energy network, and hopes to supply 50 per cent of the city’s need within 30 years. Envida Community Energy, a division of city-owned Guelph Hydro, will develop and build the system. Tricar’s buy-in is considered a major step in the growth and promotion of the system.

Key proponents of the plan, including local politicians, city officials and Tricar executives crowded into Tricar’s River Mill Condominium Presentation Studio in the Old Quebec Street Mall for the announcement Tuesday. They later toured the Galt District Energy System’s central plant in the Sleeman Centre, an elaborate system of boilers, pumps, valves and pipes based in tried and true technology but with modern technological innovations.

Rob Kerr, the general manager of Guelph Municipal Holdings, told the gathering the system would be progressively expanded as general infrastructure work is carried out on downtown streets.

“In our plan we talk about 50 per cent of the heat demand in the city being served by the system by 2041, and 140 kilometers of pipe will get us there,” Kerr said in an interview, adding that about 40 per cent of the demand met will be concentrated in the downtown.

“We are coordinating our growth to a lot of development that is happening downtown,” he said, speaking of the expansion of the district energy system. “We are waiting to get underground to start laying pipe.”

Starting this fall, the installation of underground pipes will begin along Macdonell, Woolwich, and Wellington streets in the downtown. An Envida official at the news conference said the work would require road closures. Affected businesses will be notified well in advance of the work being carried out. Envida was unable to give a cost estimate of the work when asked at the event.

Adam Carapella, vice president of the Tricar Group, said the company has been a leading residential high-rise builder for nearly 30 years.

“One of the things we’ve learned is for a project on any level to be truly successful, you want to be able to contribute along economic, cultural and environmental lines to the community in which you are building in,” Carapella said. “The announcement today furthers that commitment.”

He said the company is excited about the district energy opportunity, a process that took nearly a year to iron out. He thanked Envida for “working diligently with us and our engineers in getting us all the answers.”

One of the biggest advantages of being part of the system will be the net benefit enjoyed by Tricar’s homeowners, he added. The system is more efficient, effective, and reliable, and it is also more cost-effective. It will result in lower utility bills in the future for condo owners.

The heating and air conditioning equipment in the new building, the second of Tricar’s condo towers downtown, will look like any other equipment, with programmable thermostats in the 139 suites. The central plant in the Sleeman Centre uses natural gas to heat water, and has a chilling unit for cooling water.

“District energy is a highly efficient way of heating and cooling,” Farbridge added. “It provides reliable, cost-competitive and clean heating and cooling, while consuming less energy and generating fewer greenhouse gases. It also helps us make better use of local energy sources. It creates local jobs, and it keeps more energy in Guelph.”

Barry Chuddy, CEO of Guelph Municipal Holdings Inc., said Guelph has a longstanding history of community planning, with growth strategies being in place since the beginning. Attracting jobs and investment, while improving the environment are key components of contemporary planning, he indicated.

Strategic investments in utility infrastructure have been a hallmark of the city’s growth over the years, and that strategy continues with the district energy system, he said. The system will lower energy costs for those connected to it, generate revenue for the city, and improve the environment.

“I think John Galt and the city fathers would be applauding right now,” Chuddy added.

Sandy Manners, Guelph Hydro’s director of communications, said the estimated cost for phase one of the Galt District Energy System, is approxmimately $13 million. This phase includes a network of insulated, underground pipes and the central thermal energy facility in the Sleeman Centre.

It also offers the capacity to provide heating and cooling for the Sleeman Centre, River Run Centre, Tricar’s River Mill condominium building as well as a significant number of other buildings in the downtown core, she said.