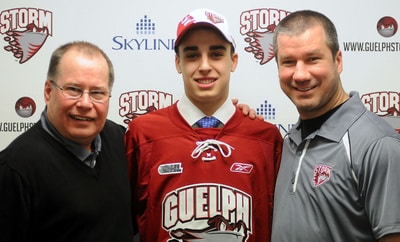 In Guelph, there is perhaps no better place to be on a Friday night than the Sleeman Centre, taking in a Guelph Storm home game. Running from late September until April or later, Ontario Hockey League action has been on display in the heart of Guelph since 1982. Guelph has a deep, rich history of junior hockey success that dates back over 45 years. Having produced several NHL all-stars as both the Guelph Platers and, more recently, the Storm, the team carries a strong reputation around the OHL.

Founded in 1968 as the Guelph CMC’s, the Platers produced a number of NHL-calibre players which includes the likes of Gary Roberts, Kirk Muller, Steve Chiasson and Craig Hartsburg. Playing in the old Guelph Memorial Gardens, now the site of the new Guelph City Hall, the team was a big draw until 1989. The Platers left for Owen Sound before the the 1990 season, but fortunately, the city wasn’t without a major junior hockey team for long.

In 1991, the Guelph Storm was founded after the historic Toronto Marlboros were relocated after a 2-year stay in Hamilton. After a less than stellar start, the franchise blossomed throughout the 90’s and into the new millenium. Winning 2 OHL championships and appearing in the CHL’s Memorial Cup 4 times put the Storm on the map. In 2000, they moved into the Guelph Sports and Entertainment Centre, which has since been renamed the Sleeman Centre, and can seat upwards of 4,900 fans for their home games.

The Storm are once again setting up for a Memorial Cup run. This new core of players is looking to follow in the footsteps of Storm-alumni-turned-NHL-superstars Dustin Brown, Todd Bertuzzi, Drew Doughty, Dan Girardi and Ryan Callahan. This upcoming season could also be a great chance to see a pair of future Toronto Maple Leafs in action. Goaltender Garret Sparks and defenceman Matt Finn have been selected by the Leafs in the NHL Draft back-to-back years, going in the 7th and 2nd rounds of the 2011 and 2012 Draft respectively. In an era where you can’t take in a Leafs’ game for under $100, the sub-$20 price tag for a night out in Guelph is more than enough reason to watch these kids before they reach the big stage.

With the team poised to go far this season, Head Coach and former NHL’er Scott Walker will be put to the test of making sure his team lives up to the expectations. With a number of NHL prospects including: Scott Kosmachuk, Tanner Richard, Brock McGinn and Andrey Pedan -plus the aforementioned Sparks and Finn- on display every night, Guelph Storm home games will certainly be a show worth watching all winter long. You can order Season Tickets by visiting http://www.guelphstorm.com/page/2012-13-season-tickets or you can grab your tickets on a nightly basis at the Guelph Storm Box Office. Storm City is always open to new hockey fans, see you at the Sleeman Centre this fall!