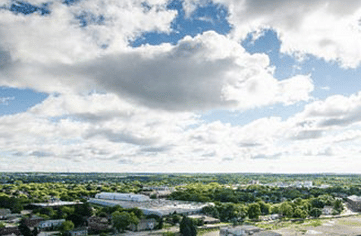 The Southeast view from near the top of RiverHouse.

In case you missed it, reports went out through both the Guelph Mercury and CKCO TV in Kitchener hailing the sale of the first Million Dollar Condo unit in Guelph’s history. Located on the 17th floor of 18 in the RiverHouse development, Suite 1703 is an immaculately appointed penthouse on the Southeast corner of the building. Large windows on both sides of the unit will flood the living areas with light from dawn til dusk everyday. The entire penthouse portfolio at RiverHouse features an exceptional level of finish.

Tricar designed RiverHouse Condominiums to be an upscale, luxury development; unprecedented in Downtown Guelph. The sale of 1703 leaves only 3 penthouses remaining from the array Tricar incorporated into their plans. In being pioneers, Tricar and Planet Realty have found that buyers are willing to pay for a premium product, especially with the variety of cultural and entertainment venues at hand downtown. It’s clear after seeing how well Guelph received the project that they made the right choice.

Below is the full article from the Guelph Mercury:

The crown jewel of Tricar’s upscale RiverHouse condominium development in downtown Guelph just sold for just over $1 million, the first condo in Guelph to hit the seven-digit mark.

The unit in question is a 3,000-square foot penthouse on the 17th floor of the 18-floor development at the corner of Woolwich Street and Macdonell Street.

The 17th and 18th floors are made up of nine penthouses.

Unit 1703 is the largest condo in the 131-unit complex. It has a southeast facing view over the river, a terrace, balconies off both bedrooms, upgraded cabinets, countertops and floorings and a fireplace. Stainless steel appliances, stacked washer and dryer and a personal wine cooler are provided.

“Since RiverHouse opened its doors it has been a runaway success. There was a huge pent-up demand,” said broker Karen Kessel of Planet Realty, which has been selling the units. “There was a need for a luxury condo for downtown Guelph.”

The identity of the buyer was not revealed.

Kessel said that while there have been some younger people buying the units, and Toronto commuters, the majority of buyers have been more mature homeowners looking to downscale to something smaller that doesn’t include maintaining outdoor property.

“The lion’s share of the people are looking to downsize,” she said. “They want to move into an urban setting that provides a certain lifestyle.”

The cheapest units in the development are priced in the low $300,000s, but only four units in the entire complex remain unsold.

Kessel said the buyers are attracted by the quality of the units and location: being near the amenities that downtown offers, most notably entertainment and restaurants.

People are scheduled to move into the lower units beginning June of next year, with the penthouses expected to be move-in ready by the following December.