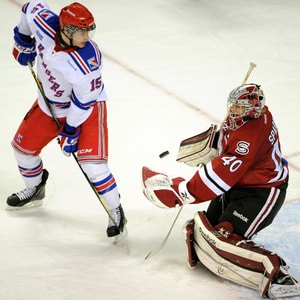 For just the 3rd time in their 23 year existence, the hometown Guelph Storm are gearing up for a playoff date with the Kitchener Rangers.

For all that is made of the Highway 7 Rivalry, it rarely comes to blows in the post-season, when games hold a lot more at stake. The teams’ first meeting in 2001-02 saw the Storm breeze through a first-round showdown in 4 games. That year, Guelph earned a birth in the Memorial Cup, the penultimate junior hockey tournament. Fortunes were reversed the next year as a talent-heavy Rangers squad beat the Storm in 5 games, en route to their first Memorial Cup championship since the early 80’s.

This year, the teams come into the playoffs neck-and-neck. Both teams are 6-3-1 in their last 10 games. Both teams amassed 39 wins over the course of the regular season.

Guelph’s leading scorer Scott Kosmachuk has 35 goals on the season. Kitchener’s Matt Puempel has 35 himself.

Rangers goalie John Gibson won the only head-to-head between he and Garret Sparks this season, a 3-2 nail-biter last week. Gibson sports a .928 save % this season, good for fourth in the league. Sparks led the entire OHL with 7 shutouts.

Even looking at head-to-head records, there isn’t much to differentiate the teams. Kitchener led the season series 5 games to 3, but 4 of the 8 games were decided by a single goal. Consider too that both teams have been bitten by the injury bug this season. Storm captain Matt Finn has missed significant time due to various ailments, as have Rangers standouts Gibson and Puempel. There may not have been a true test of each team’s ability to date.

Where previous series between the two teams were relatively uneventful, this one is shaping up to go down to the wire. The series is a best-of-seven format with the first two games in Kitchener, games 3 & 4 in Guelph and then alternating as necessary. Games 3 & 4 go next Tuesday and Thursday at the Sleeman Centre (click here for full schedule). Tickets for these games are likely to sell out quickly, with prices for adult tickets starting at $24.50 for adults, $20.50 for students and $15 for children. Get them while you still can, these teams surely won’t disappoint. The fireworks are sure to fly in Downtown Guelph next week.