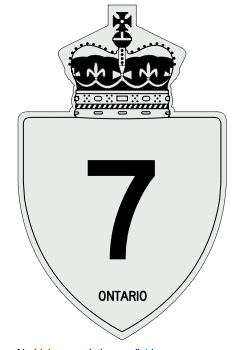 Much has been made of the demand for expansion of Highway 7 between Guelph & Kitchener, but new requests are being made by the Guelph Chamber of Commerce to broaden the route between Guelph & Brampton as well.

Their projections show it being a necessity to the viability of many local Guelph businesses over the coming years. They view present day levels of 401 congestion moving east as the main reason to expand and reform the Highway. Having a parallel corridor to ship products would eliminate some of the losses incurred from heavy gridlock along the 400 series highways.

That’s not to say all are in agreement however. Some feel that this “build another highway” mentality is what promotes the use of detrimental transportation and creates congestion problems in the first place. Others point to the expansion of GO service and other modes of transit as a way to quell the gridlock issues, while protecting the environment and being more progressive at the same time.

Have a read through Chris Heralt’s Mercury article and pick a side for yourself:

GUELPH—A four-lane highway leading to Brampton, similar to the one approved between Guelph and Kitchener, will eventually be required by the local business community, argues the president of Guelph’s Chamber of Commerce.

Lloyd Longfield says the Guelph Chamber of Commerce and other chambers across the province have begun lobbying the province to explore the possibility of upgrading Highway 7, some time in the next 20 years.

“Rather than mimicking the highway to Kitchener,” the new highway would give “us a parallel route to the 401, only not ending in Toronto,” Longfield said.

The expanded expressway would help area manufacturers, farms and other businesses move goods to the Greater Toronto Area without clogging Highway 401, which often slows to a halt due to traffic volume, accidents, construction or a combination of all three.

But the new highway would likely pass through sensitive environmental areas, and have to cross part of the Niagara Escarpment, which is protected by an agency of the Ontario government.

Terry MacIntosh, a naturopathic doctor and co-founder of Sustainable, Healthy Integrated Forms of Transportation or “SHIFT,” said he is concerned some are entertaining the thought of a new highway before GO Transit or Via train service to the city is improved.

“It’s more of the same,” MacIntosh says of the push to build a Brampton-Guelph expressway.

But Longfield says the highway upgrade can be done responsibly.

“You look at highways that go through mountains and environmentally sensitive areas, and turn those types of challenges over to the people who know how to do things properly.”

But Cam Guthrie, a city councillor, said that without the new highway, Guelph will not attract investment from firms seeking to locate and invest in Ontario.

“Not everything can be transported on bicycles,” Guthrie said, dismissing concerns from environmentalists.

Longfield encouraged those who would oppose an upgraded highway to “contribute to the conversation.”

“It’s good to have other points of view to make sure you come up with the right answers. You come up with better solutions with more voices at the table.”

The province’s long-term transportation plan already calls for the widening of the 401 to six lanes each way, linking Highway 400 to the 401 near Milton and upgrading the Hanlon Parkway over the next 25 years.

“In 20 years time, Guelph is supposed to have 50,000 more people living here, we’re supposed to have 31,000 more jobs,” Longfield said. “We don’t think there’s much of an alternative other than to start talking about it.”

Guthrie predicts city council would be divided on the issue of a new highway.

“It is unfortunate that one half of the council doesn’t understand the importance of moving goods and people to our local economy.”