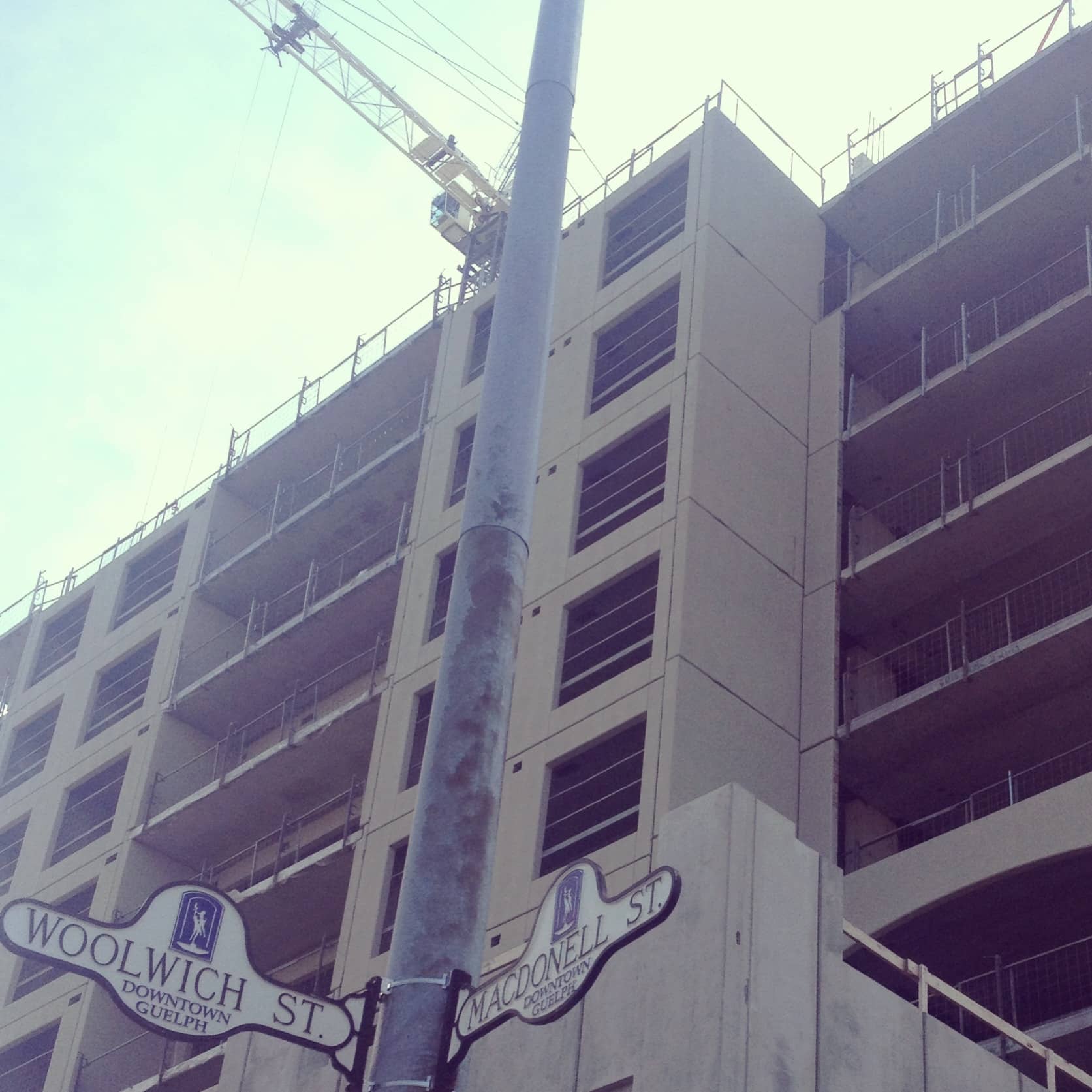 Construction on RiverHouse Condominiums has reached 14 of its 18 storeys to date.

Big news from the desks of The Tricar Group’s executive this week, as news broke of their imminent plans to begin construction on their second of two high-rise luxury condominiums in the downtown Guelph. With the success of RiverHouse Condominiums, Tricar plans to capitalize on their positive momentum and move-up development on the former Marsh Tire Centre property at 150 Woolwich St.

It didn’t take long for the Guelph Mercury to release this news, straight from President Joe Carapella himself.

With the current focus on a revitalized downtown, small Guelph businesses stand to gain from the further influx of new investment, as well as a greater population with disposable income. The increase in traffic for downtown Guelph restaurants, shops and cafés could lead to big returns for their owners. Mr. Carapella anticipates construction starting in late 2013, as soon as the roof is on the current project across the street.

Here’s the full article from the Mercury’s Scott Tracey:

The developer of a luxury condominium tower taking shape on Macdonell Street hopes to break ground on a second tower by the end of this year.

“As soon as we’re able to get the roof on the first building and are able to take the crane down, we’d like to just move it across the street and begin on the second one,” Carapella said, noting the Macdonell building should be at that stage by the end of October.

Exterior work on the second building would begin while the interior of the first one is being completed.

Tricar is seeking a zoning bylaw amendment that would allow it to erect an 18-storey mixed-use building on the former Marsh Tire site at 150 Wellington St. East. It would be just south of the company’s RiverHouse project.

While RiverHouse has 130 condo units, the new project would have 165 units as well as 611 square metres of ground-floor commercial area.

Carapella said the company was moved to begin the second project after the incredible success of RiverHouse, which is fully sold out. This included the sale of Guelph’s first million-dollar condo on the building’s 17th floor.

“It sold out in record time and we actually have a waiting list, so we decided to move the second project up,” he said. “There is a pent-up demand in Guelph for this type of product … as we saw with how fast RiverHouse sold.”

Coun. Jim Furfaro, whose ward includes downtown, said he could not rule out work beginning on the second building before the end of this year.

“I know Mr. Carapella and his firm are eager to get to phase two, and I think if that eagerness and the (zoning amendment) application line up, I could see it happening this year,” Furfaro said.

But the councillor cautioned there are many steps that still must be taken.

“I know he wants to move forward with it and we do as well,” Furfaro said, “but obviously we have to be careful everything is done correctly.”

The proposal will formally be presented to councillors during a public meeting in council chambers at 7 p.m. on Sept. 9. Public delegations will also be heard at that time, said city senior development planner Chris DeVriendt.

He noted the zoning on the site would allow a building of only six storeys. However, the Downtown Secondary Plan — an amendment to the Official Plan approved in 2012 — envisions four sites downtown as appropriate for buildings up to 18 storeys high.

These include the two Tricar locations, as well as the northeast and northwest corners of the intersection at Wellington and Wyndham streets.

“The policies of the Downtown Secondary Plan do allow a building of this size at that site,” DeVriendt said of the latest Tricar proposal.

Furfaro said the proposal speaks to the viability of the city’s downtown core.

“I think it shows people are convinced the amenities of downtown are appealing enough that it’s where they want to be,” the councillor said. “Who would have ever guessed we’d see a million-dollar condo in downtown Guelph?”