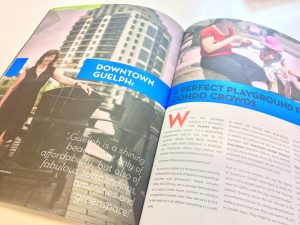 Read more in Guelph Chamber of Commerce Magazine’s “Play” issue, out now around the Royal City.

Downtown Guelph is a zoomer playground! Baby boomers round out the majority of new condo owners with an eye to living here, living well and being on the move. It could be on foot, on bike – even blades. This is the generation that isn’t growing older, just better.

And they’re finding there is no better place to move to than downtown Guelph.

But it’s not just zoomers who see the appeal of downtown Guelph. There’s a younger version that also wants it all, just in smaller steps. They’re looming on the horizon to beginning a fulfilling life. They could be just starting out, or transitioning from rental to home ownership. They’ve landed a great job, enjoy a fabulous social life and want to stay connected to the pulse of the city. They’re active and on the move.

Downtown Guelph is where the active and engaged of any age want to rise in the morning, meet for coffee, walk the dog, visit the market – without thinking about the car.

Planet Realty knows all too well that downtown Guelph is a gold mine to homebuyers. “We don’t have to sell Guelph. It sells itself,” explains Planet Realty broker Karen Kessel.

In less than a year, Kessel and her team sold out all 130 condo suites at River House Condominiums, located at the corner of Macdonell and Wellington Streets. A year later, they did it again selling out the sister building, River Mill Condominiums. That’s 300 newcomer families LIVING downtown, with baby boomers forming the lion’s share of buyers. After years of commuting, they are parking the car and are venturing out on foot to explore.

Downtown Guelph is a world away from the strip malls and box stores that you’ll pass on the way into The Royal City. It’s where everything is a walk away. The Basilica of Our Lady Immaculate guides visitors from her position overlooking downtown.

This isn’t a downtown of high-rises reaching to the skies or rush hours of monumental proportions. Lifestyle is the overwhelming focus. You’ll find a century of Victorian architecture that blends with fresh designs of today and amenities – yes amenities that move forward with trendy shops, boutiques, cafes and restaurants.

While the GTA may see a younger demographics as its typical condo buyer, boomers are taking a stronghold in Guelph with their demand to have it all and live in the heart of it all. To boomers, Guelph is a shining beacon of not only affordability, but fabulous surroundings, amenities and greenspace.

River House and River Mill combine the best of designer features and city life. Both are within easy reach of the Old Quebec Street Mall (still an indoor mall!), GO Transit, the indoor farmers’ market, and Guelph Market Square. With the Speed River winding its way through the city and downtown, green space and parks along its banks offer miles of walking and biking trails and scenic views.

What do boomers want? “A lot of things,” says Kessel. “It’s a demanding generation. They’ve got five or six decades under their belts, raised a family. Some have operated a business and travelled. Others have worked and invested. They want to continue to do it all.”

These downtown newcomers are in reach of everything, in touch with the city. They’ve got more time to play, explore and engage in local happenings, fill their calendars with local events and festivals, visit the market, grab a coffee, go for a run or a round of golf, entertain friends….. They fill the seats at the River Run Centre for theatre, music and dance. Across the way, you’ll also find them at the Sleeman Centre, home to the Guelph Storm as well as concerts and events. They spill into the streets and into downtown for apres theatre apertifs or post game munchies. Then they can just walk home.

The next generation of downtown dwellers is following in the footsteps of the boomers with a desire to live in the now. While condo needs might be simpler and smaller, their demand for leisure activities, dining hot spots and and active lifestyle is not – and they find it in downtown Guelph.

Planet Realty is the downtown condo expert. Public transit, moving services, utility services. And the fun stuff – like where to go, what to do and who to see. Want to know the best place to eat? Work out? Run? Get the dog groomed? Best ice cream, coffee, pizza? Just ask. Planet Realty is connected to living, and living well, in downtown Guelph.