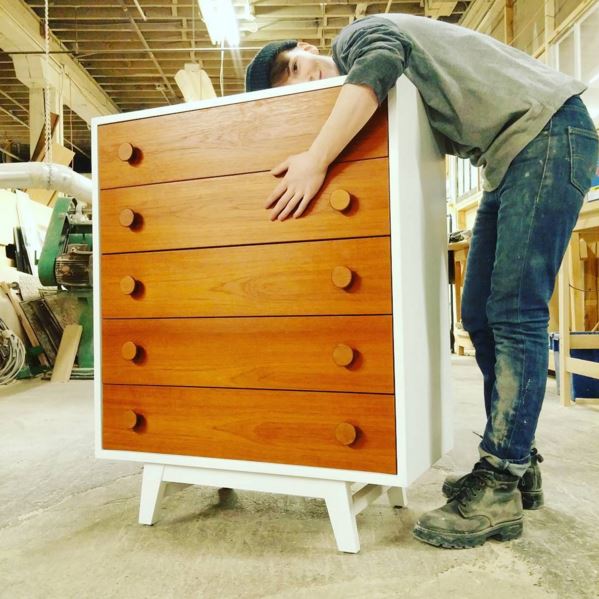 If you’ve never heard of Era 66 Furniture Design, one trip to their Instagram page is all it will take to enthrall you in their craftsmanship and creativity.

Based out of Guelph, the 2nd generation operation has been developing modern & custom pieces targeted at condo dwellers, and selling their work directly to consumers.

Era 66 by all accounts represents the city in their products. They’re a great representation of the opportunity, creativity and excellence this city boasts; and adding a piece from their works is a prime way to embrace the place you call home. If you’re new to Guelph or new to condo living, a look into their products will serve you well.

Learn more about Kip, Alexa and their craft in this excerpt from GuelphToday.com:

A blend of old school and next wave, Era 66 is a small-scale furniture maker in Guelph that has found a niche market among Toronto’s young condo dwellers.

Based on a contemporary, but old-fashioned way of doing business – and on mid-20th century designs – the company has taken off in a very short period of time.

Life partners and business partners Kip and Alexa Perry started the furniture making business two years ago when they were both 21. They do it all – source the hardwood and plywood from local suppliers, cut, assemble and finish the pieces, and sell direct to buyers.

Ontario used to do furniture manufacturing on a large scale, but that era is essentially over. Small is where it happens, the women said.

Now 23, they started out by following their creative and entrepreneurial instincts,  turning them into a thriving business.

“It’s been going shockingly well,” said Alexa. So much so that they recently bought a house.

The company is rooted in a kind of pre-Industrial Revolution model of making and selling products, where a craft or trades person would make something and sell it directly to a customer.

Alexa said people in their mid-30s living in small Toronto loft-condos have the financial means to purchase items like handmade sideboards, cabinets and entertainment units.

Era 66 makes such items based on designs that were all the rage back in the 1960s when Scandinavian companies like H.P. Hansen, Dyrland, and Silkeborg made furniture that was sparse on decorative elements but high on function and sleek styling.

There is no middleman in their business model, and their only sales portal for now is an Instagram site, which has over 5,000 followers. A website is coming.

A few years ago, Kip and Alexa travelled in Asia for a year, exploring the world while figuring out what they wanted to do with their lives. They shared an aspiration to be their own bosses.

Kip came from a furniture making family. Her parents, Cindy and Rodney McGregor, have been builders for decades, and have a large workshop off York Road in Guelph. Era 66 shares that space.

As a teenager, Kip began learning the small jobs. She acquired the skills, but never thought to use them to make a trade for herself until quite recently.

“I started working with my parents when I was 16, starting with small jobs and slowly working up to the larger jobs,” Kip said. “I never thought I would get into it myself because I grew up with it, and rebelled against it.”

But then she made her first piece of furniture, a small side table as a gift for Alexa, and found that it came naturally.

After returning from Asia, Kip and Alexa found a cool piece of mid-century furniture in a junk shop in Guelph, refinished it and made a quick $500. Then they bought five more pieces of furniture from the same era, and made more money.

“We just kept rolling it over until we had enough money to buy materials and design our own line,” said Alexa.

In the just-starting-out phase, the partners collected as many period pieces as they could, but found refinishing work just wasn’t predictable enough. It became far less predictable when the chalk painting craze hit, with people buying up any used furniture they could get their hands on, including mid-century treasures, and revisiting it in chalk.

And so they decided then to build their own line.

“I knew some basic assembly, but not enough to really know how to put it together on my own,” Kip said, with Alexa adding that the first piece in the Era 66 line was the very first they ever made from scratch. Kip’s parents mentored them along in the process.

That first piece was a medium-sized sideboard. And as important as that first effort was, the women said it was also enormously frustrating. They were aiming for perfection but didn’t quite land it.

“It was mostly just agony,” Alexa added. “And working with your partner on things you don’t know how to do was like, double agony. We quickly had to get over arguing at work.”

The focus of the company is to make high quality furniture at affordable prices, handmade items that are comparable in price to what a big box store sells. The direct maker-to-consumer business models even allows Era 66 to beat those prices.

Alexa said the ‘manu-retailer’ model is about the only way to make a living building furniture in Canada, and the model is taking over the furniture market and bringing the craft, and the work, back to Canada.

For now, sideboards appear to be what the Toronto condo market is after.

“Right now its sideboards, which are like long, multi-purpose units that usually have doors and drawers, and they can go anywhere,” Alexa said. “We designed our line to fit in condos, so everything is pretty compact.”

They do more than sideboards. A 10-foot walnut head board was a recent custom job, an item that was lifted into a bedroom by crane.

The couple is currently working with a web designer on a website where customers can easily design their own furniture, and have it built by Era 66.

There is a massive market for custom-built furniture, and Alexa and Kip said making design readily accessible will make the process easier for customers, and help expand their business.